The Beatles Wiki
Register
Don't have an account?
Sign In
Advertisement
in: Featured, Articles with unsourced statements, The Beatles members,
and 5 more
English

View source
watch 01:36
We're Getting Mutants in the MCU - The Loop
Do you like this video?
Play Sound

Paul James McCartney, MBE, is an English singer, songwriter, multi-instrumentalist, and composer born on June 18, 1942. He was a member of The Beatles, who, with John Lennon, George Harrison, and Ringo Starr, achieved worldwide fame and several innovations in music. His partnership with Lennon, known as Lennon-McCartney, has had several successful and largely popular songs and remains the most successful songwriting partnership in history. After the band broke up, he formed Wings with guitarist Denny Laine and his wife, Linda McCartney. Later, he has pursued a solo career and has diversified in electronic pop and orchestrations.

McCartney is considered one of the most important and successful songwriters to this date; His Beatles song "Yesterday" is the most covered song in history with over 2,200 covers, and his Wings song "Mull of Kintyre" is one of the best selling singles in Britain. He has been inducted in the Rock and Roll Hall of Fame twice for work as the Beatles and as a solo artist and has won 21 Grammys. He has sold 25.5 million units according to the RIAA in America. In 1965, he, along with the other Beatles was awarded the Most Excellent Order of the British Empire, and he was knighted in 1997 for his services for music.

A vegetarian himself, McCartney is also an activist promoting animal rights, a vegetarian life and music education. McCartney married Linda Eastman in 1969 and became the adoptive father of her daughter Heather. The pair had three more children together, and remained married until Linda's death in 1998. McCartney was married to Heather Mills from 2002 to 2008, from which they had one daughter together. McCartney has been married to Nancy Shevall since 2011.

Paul McCartney was born on June 18, 1942 to parents Mary McCartney and James McCartney. On 31 October 1956, when Paul was only fourteen years old, his mother, Mary McCartney, died of breast cancer. After passing his 11-Plus exam in 1953, Paul enrolled in the Liverpool Institute, where he met future band mate, George Harrison, in 1954.

McCartney was heavily influenced by American Rhythm and Blues music. He has stated that Little Richard and Elvis were his idols when he was in school, and that the first song he ever sang in public was "Long Tall Sally," at a Butlins holiday camp talent competition.

Paul was introduced to John Lennon and his band The Quarrymen at the St. Peter's Church Hall fête in Woolton on 6 July 1957. McCartney was very interested in music due to the influence of his father, who was once a jazz musician. Paul joined the band, and he and John began writing songs together. Although John was the leader of the band, Paul was always full of ideas.

When bassist Stuart Sutcliffe quit the band, Paul became the group's permanent bassist. The Quarrymen officially changed their name to The Beatles soon after.

The Beatles After former drummer Pete Best was kicked out of the band, Ringo Starr was brought in to replace him. The Beatles soon became extremely popular in Britain and America. Paul wrote many famous songs during this time, including "Yesterday," "Hey Jude" and "Let It Be."

McCartney is a noted animal lover. He had a sheepdog named Martha and wrote a song about her called Martha My Dear. She was one of the first of many McCartney sheepdogs.

When Beatles manager Brian Epstein died of a drug overdose, McCartney urged the band to stay together, while the other three members were ready to quit. It was Paul's idea to make a new film, Magical Mystery Tour.

Unfortunately, The Beatles had some creative differences, and Paul announced they had officially broken up on April 10, 1970. The band had been wanting to disband since the death of their manager, Brian Epstein, but McCartney had kept them together. During the break-up times, Paul would try his best to get them back to what they were in 1962–66, but other band mates found it annoying and quit. Around the time of the band's breakup, Paul released his first solo album, McCartney.

Paul and Beatles drummer Ringo Starr have a few notable things in common. Paul and Ringo are both left-handed, though Ringo became ambidextrous after his grandmother constantly nagged him to write with his right hand. No matter how hard Paul tried, he never learned how to use his right hand very well. Paul and Ringo were both vegetarian, but for different reasons; Paul ethical and Ringo medical.

In 1971, McCartney released his second solo album, Ram. The album was credited to both Paul and his wife. In August, Paul formed the band Wings. The band consisted of Paul, his wife, guitarist Denny Laine and drummer Denny Seiwell. They soon released their debut album, Wild Life.

Wings went on tour in 1972, and released their second album, Red Rose Speedway, in 1973. That same year, Wings released Band on the Run, their most critically acclaimed album. The album got the band two Emmy Awards. Through 1975 and 1976, Wings embarked on the ambitious Wings Over the World tour, which was released as Wings over America.

The band released music until 1981, when the band disbanded. McCartney said that the band "parted in a friendly way."

McCartney's first solo album was developed during the breakup of The Beatles and was released in April 1970 about a month before the release of Let It Be. The album is notable for the fact that McCartney performed all instruments and vocals besides some backing vocals performed by his wife, Linda. The album enjoyed moderate success. The album's most memorable track is "Maybe I'm Amazed"[citation needed].

His second solo album, Ram, was released in 1971. Most of the songs were developed after a lengthy vacation in Scotland with Linda. The album has a deliberately ragged sound in some parts. Criticisms include comments of overly melodic tunes and overly optimistic cheerful sentiments. However, Ram has proven to be a sweet gem of an album which becomes increasingly charming as time passes and the music world evolves. The album also has an abundance of tongue in cheek humour. Take for example the song "Eat at Home" which describes McCartney's romantic wishes. The song "Too Many People" was (wrongly) received as a jab at The Beatles and particularly John Lennon. The song prompted negative remarks from Lennon and it is rumured that Lennon's song "How Do You Sleep" was produced in response to McCartney's comments in music and the press.

After former band mate John Lennon was murdered, McCartney and Wings stopped touring, causing the breakup of the band. Soon after, McCartney sang, along with Ringo Starr, backup on "All Those Years Ago," George Harrison's tribute to John Lennon.

McCartney released McCartney II in 1980 and Tug of War in 1982. The latter reunited him with ex-producer George Martin and Ringo Starr.

In 1984, Paul wrote and starred in Give My Regards to Broad Street. The movie did not do well critically or commercially.

During the second half of the decade, Paul released five albums, including Flowers in the Dirt and Press to Play. In late 1989, McCartney embarked on his first concert tour since John Lennon's assassination.

McCartney has achieved twenty-nine number-one singles in the US, twenty of them with The Beatles, the rest with Wings and as a solo artiste. McCartney has been involved in more number-one singles in the United Ringo than any other artist under a variety of credits, although Elvis Presley has achieved more as a solo artise. McCartney has achieved 24 number-ones in the UK: solo (1), Wings (1), with Stevie Wonder (1), Ferry Aid (1), Ban- Aid (1), Ban- Aid 20 (1) and The Beatles (17). McCartney is the only artiste to reach the UK number one as a soloist ("Pipes of Peace"), duo ("Ebony and Ivory" with Stevie Wonder), trio ("Mull of Kintyre", Wings), quartet ("She Loves You", The Beatles), quintet ("Get Back", The Beatles with Billy Preston) and as part of a musical ensemble for charity (Ferry Aid). In America, McCartney reached number-one with 29 singles: solo (1), Wings (5), with Stevie Wonder (1), with Michael Jackson (1), with Linda McCartney (1), with the Beatles (20); he was also the composer of "A World Without Love," a #1 single for Peter and Gordon. McCartney's song "Yesterday" is the most covered song in history with more than 3,500 recorded versions[1] and has been played more than 7,000,000 times on American TV and radio, for which McCartney was given an award.[2] After its 1977 release the Wings single "Mull of Kintyre" became the highest-selling record in British chart history, and remained so until 1984.[3] (Three charity singles have since surpassed it in sales; the first to do so, in 1984, was Band Aid's "Do They Know It's Christmas?", whose participants included McCartney.)

On 2 July 2005, he was involved with the fastest-released single in history. His performance of "Sgt. Pepper's Lonely Hearts Club Band" with U2 at Live 8 was released only 45 minutes after it was performed, before the end of the concert. The single reached number six on the Billboard charts, just hours after the single's release, and hit number one on numerous online download charts across the world. McCartney played for the largest stadium audience in history when 184,000 people paid to see him perform at Maracanã Stadium in Rio de Janeiro, Brazil on 21 April 1990.

On 7 June 2006, McCartney celebrated his 64th birthday, the human milestone that was the subject of one of the first songs he ever wrote, at the age of sixteen, the Beatles song "When I'm Sixty-Four."} 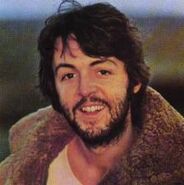