The Beatles Wiki
Register
Don't have an account?
Sign In
Advertisement
in: Articles with entries in the Paul McCartney Project, Songs credited to Lennon/McCartney, The Beatles songs, Songs on Rubber Soul

Norwegian Wood (This Bird Has Flown) 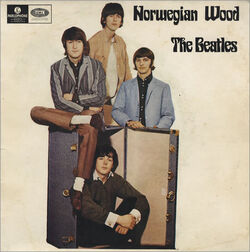 Norwegian Wood (This Bird Has Flown)

You Won't See Me

Norwegian Wood (This Bird Has Flown) is a song written and sung by John Lennon and credited to Lennon/McCartney, released on the Rubber Soul album in 1965. This track is generally credited as being the first pop recording to use the sitar, an Indian stringed instrument (although as the TV Tropes Wiki points out, this is wrong; the first known pop recording featuring a sitar was "Goodness Gracious Me" in 1960, and the Kinks also got there before the Beatles). "Norwegian Wood" sparked a musical craze for the sound of the novel instrument in the mid-Sixties. The song is now acknowledged as one of the cornerstones of what is now usually called "world music", and it was a major landmark in the trend towards incorporating non-Western musical influences into Western popular music. Harrison was recently introduced to Indian classical music and the sitar by David Crosby of the Byrds. He soon became fanatically interested in the genre and began taking sitar lessons from renowned Indian sitar virtuoso Ravi Shankar.

Norwegian Wood was John Lennon's way of telling his wife (Cynthia Lennon) that he had an affair.

The song was recorded 12 and 21 October 1965 in EMI Studios. Early version (Take 1) was published in the Anthology 2, and Take 2 in an informal bootleg.

This song is in the Paul McCartney Project at this page.

I once had a girl

Or should I say, she once had me?

She showed me her room

So I looked around and I noticed there wasn't a chair

I sat on the rug

Biding my time, drinking her wine

We talked until two

And then she said, "it's time for bed"

And when I awoke

I was alone, this bird has flown

So I lit a fire