The Beatles Wiki
Register
Don't have an account?
Sign In
Advertisement
in: The Beatles' Wives and Girlfriends, People, Deceased people

Edit
watch 01:36
We're Getting Mutants in the MCU - The Loop
Do you like this video?
Play Sound

Maureen Starkey Tigrett, née Mary Cox (4 August 1946–30 December 1994) was the first wife of Ringo Starr, the drummer of the Beatles.

Mary "Maureen" Cox was born on August 4, 1946 in Liverpool, England, the only child of Joseph and Florence Cox. Leaving school at fourteen, she became a hairdresser and changed her name to "Maureen." Her friends just called her "Mo".

Maureen loved the new, hot Merseybeat sound and often hung out at The Cavern, asmall club where local bands played. There she met and dated John Brynne, from the group "Rory Storm and The Hurricanes." They broke up in 1962.

During this time, a new group called "The Beatles" regularly played at The Cavern. Mo developed a crush on the band's drummer, Ringo Starr and asked him for an autograph. About three weeks later, Ringo asked her for a dance. Soon after they began dating.

As The Beatles rose in popularity, so did the number of passionate fan-girls. When it was common knowledge that Mo and Ringo were in a relationship, she was often threatened and sometimes attacked by jealous female fans. Once an angry fan saw her sitting in a car and scratched her.

Although fans were jealous of Mo, it was Maureen who answered the letters they wrote to Ringo.

In September 1963, Ringo invited her to go to Greece with him, Paul McCartney and his girlfriend at the time, Jane Asher. In May 1964, Ringo and Maureen went to the Virgin Islands — without the knowledge of her parents — because she was afraid they would not give her permission to go. Of course, her parents found out anyway, when they later read it in the newspapers.

The courtship of Ringo and Mo ended for a time in 1964, as the Beatles' popularity skyrocketed. But when Ringo had an operation to remove his tonsils, it was Maureen who was there. Ringo proposed to her in the hospital and she accepted.

In January 1965, Maureen discovered she was pregnant. She was eighteen. At that time, there was a social stigma given an unwed mother and her baby, and the best option was to marry Ringo.

On February 11, 1965 at 8:00 am, Ringo and Maureen were married, at Caxton Hall Registry Office. The best man was Brian Epstein, manager of The Beatles and the reception was at Brian's house. 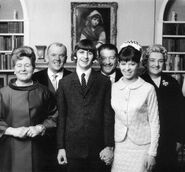 Ringo signs in a registry book. 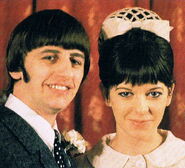 Ringo and Maureen in colour.

On September the 13th, 1965, Maureen gave birth to their first child, Zak Starkey, in the National Maternity Hospital in Queen Charlotte. This was the same day the single "Yesterday" was published. On August 19th, 1967, Jason Starkey was born. On November the 11th, 1970, Lee Parkin Starkey was born. 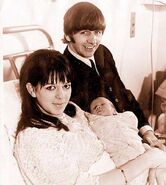 By the time Lee was born in 1970, the marriage was in trouble. When the Beatles broke up in 1970, so did the marriage: Ringo's infidelities and his increasing alcoholism was a problem for the whole family. In 1972, Starkey visited George Harrison and during that visit George confessed how much he loved Maureen. (A rumour went around that Ringo proposed to swap partners, but this was just a rumour.). Maureen had a brief affair with George, but despite all the problems facing her marriage, Maureen did not want a divorce.

Ringo insisted that it was better to obtain a divorce and Maureen accepted reluctantly. In July 1975, the couple finally separated when Ringo's affair with the American model Nancy Andrews was made public.

Life after the end of her marriage[]

In the early 80s, Maureen began a relationship with the owner of the Hard Rock Cafe, Isaac Tigrett. There was an attempt at reconciliation between Maureen and Ringo after Ringo broke up with Nancy, but it was too late. Ringo had fallen in love with Barbara Bach, his partner from the movie "Caveman". Maureen returned to her relationship with Isaac Tigrett.

Ringo and Maureen became grandparents in 1985 when their son, Zak, had a child.

In 1987, Maureen gave birth to her fourth child, Augusta Tigrett.

On May 27, 1989, Tigrett married Maureen and decided to split his time between Los Angeles, California and Boston.

Last days of life and death[]

During the opening of "Houses Of Blues" Maureen suddenly fainted. At first, she was diagnosed with a mild anaemia, Later the diagnosed was a form of leukaemia called Mylodisplasia. In October 1994, she was admitted to the Fred Hutchinson Cancer Research Center. Physicians did everything to save her life, but she lost the battle. On December 30, 1994, Maureen Starkey Tigrett died at age 48 from leukaemia. Her husband Isaac, her children, her mother and ex-husband, Ringo, were with her when she passed away.