The Beatles Wiki
Register
Don't have an account?
Sign In
Advertisement
in: Articles with entries in the Paul McCartney Project, Magical Mystery Tour, Soundtracks,
and 5 more
English

Magical Mystery Tour is an album by The Beatles, recorded between 25 April – 3 May and 22 August – 7 November 1967, which was made to correspond to the film, Magical Mystery Tour. Its first side contains most songs from the movie such as "I am the Walrus", and "The Fool on the Hill".

The album was released as a double EP in the UK, which only contained the songs in the film. In the United States, the EP was expanded into an album, which contained non-album singles such as "Strawberry Fields Forever", "Penny Lane", and "All You Need Is Love" as well as the songs from the film. Although the Beatles disapproved of the US album upon its release (due to their "no already released singles on albums" policy), it was added to the core catalogue in 1988.

Magical Mystery Tour contains songs from the movie of the same name, and the album version (which replaced the UK double-EP version as the international canonical version in 1976) also contains other singles. This movie/album was made to take you away on a "magical" journey with Paul, Ringo, John, and George, or the four magicians.

The cover art portrays the band in costumes, as seen in the I am the Walrus musical segment of the film. John is the walrus, Ringo is a chicken, Paul is a hippo and George is a bunny.

The project of Magical Mystery Tour and the album are considered to be the Beatles' only failure. (It is often said that instead of the unscripted "happenings" on the coach, what ought to have been filmed was the disruption and chaos the project unwittingly caused, as this was often more entertaining than what was actually filmed.)

All songs written by Lennon/McCartney, except where noted otherwise. 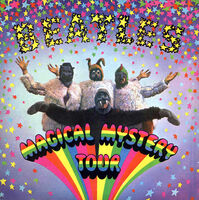