The Beatles Wiki
Register
Don't have an account?
Sign In
Advertisement
in: The Beatles albums, Albums, UK albums,
and 3 more
English

In contrast to the band's first two albums, all thirteen tracks were written by John Lennon and Paul McCartney, showcasing the development of the duo's songwriting talents. The first side of the album contains songs from the film of the same name including the title track and the previously released "Can't Buy Me Love", both of which became number-one singles in the UK and the US.

Musically, A Hard Day's Night eschews the rock and roll cover songs of the band's previous albums for a predominantly pop sound. Sputnikmusic's Dave Donnelly observes "short, peppy" pop songs characterised by layered vocals, immediate choruses, and understated instrumentation. According to Pitchfork's Tom Ewing, the lack of rock and roll covers allows listeners to "take the group's new sound purely on its own modernist terms", with audacious "chord choices", powerful harmonies, "gleaming" guitar, and "Northern" harmonica. Music journalist Robert Christgau writes that Lennon–McCartney's songs were "more sophisticated musically" than before. It also features lead guitarist George Harrison playing a Rickenbacker 12-string electric guitar, a sound that was influential on the Byrds and other bands in the folk rock explosion of 1965.

Side one of the LP contains the songs from the film soundtrack. Side two contains songs written for, but not included in, the film, although a 1980s re-release of the film includes a prologue before the opening credits with "I'll Cry Instead" on the soundtrack. The title of the album and film was the accidental creation of drummer Ringo Starr. According to Lennon in a 1980 interview with Playboy magazine: "I was going home in the car and [film director] Dick Lester suggested the title, 'Hard Day's Night' from something Ringo had said. I had used it in In His Own Write, but it was an off-the-cuff remark by Ringo. You know, one of those malapropisms. A Ringo-ism, where he said it not to be funny ... just said it. So Dick Lester said, 'We are going to use that title.'"

A Hard Day's Night is the first Beatles album to feature entirely original compositions, and the only one where all the songs were written by Lennon–McCartney. Lennon is the primary author of nine of the thirteen tracks on the album, as well as being the lead singer on these same nine tracks (although Paul McCartney sings lead on the title track's middle-eight). Lennon and McCartney co-wrote "I'm Happy Just to Dance with You", sung by Harrison, while McCartney wrote "And I Love Her", "Can't Buy Me Love" and "Things We Said Today". It is one of three Beatles albums, along with Let It Be and Magical Mystery Tour, in which Starr does not sing lead vocal on any songs. (Starr sang the lead vocal on "Matchbox" during the sessions; it appeared instead on the Long Tall Sally EP.) It is also one of three Beatles albums, along with Please Please Me and Beatles for Sale, in which Harrison does not contribute to the songwriting.

The American version of the album was released on 26 June 1964 by United Artists Records in both mono and stereo, the fourth Beatles album in the United States. The album went to number one on the Billboard album chart, spending 14 weeks there, the longest run of any album that year. United Artists rushed the album into stores over a month before the film's US premiere; as a result, the Beatles had both the number-one album and number-one single in the country when A Hard Day's Night opened on 11 August 1964.

All seven songs from the film, the first side of the UK album, were featured along with "I'll Cry Instead", which, although written for the film, was cut at the last minute. The American version also included four easy listening-styled instrumental versions of Lennon and McCartney songs arranged by George Martin conducting an orchestra of studio musicians: "I Should Have Known Better", "And I Love Her", "Ringo's Theme", and "A Hard Day's Night". After EMI acquired United Artists Records, this album was reissued in August 1980 on the Capitol label, catalogue SW-11921.

While the stereo version of the album included the instrumental tracks in true stereo, the Beatles' own recordings appeared as electronically rechannelled stereo recordings made from the mono releases. The 1980 Capitol Records reissue used the same master tape as the original United Artists LP release in fake stereo, despite the availability of several tracks with official true stereo remixes. True stereo versions of most of the songs had been issued on the Capitol album Something New, released in July 1964. "Can't Buy Me Love" and "I Should Have Known Better" finally appeared in stereo on the 1970 Apple Records compilation Hey Jude. The song "A Hard Day's Night" did not appear in true stereo in the US until the 1982 Capitol compilation album Reel Music. In 2014, the American version of the "A Hard Day's Night" album was released on CD individually and in a boxed set of all the other US Beatles albums to celebrate the fiftieth anniversary of the Beatles first US visit. This CD reissue features all of the songs in both true stereo and mono mixes. 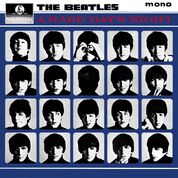 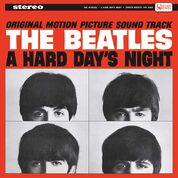 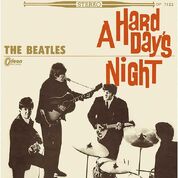